There are many things that I love about living in Paris. I'm a five minute bike ride away from the city's best boulangerie (it's baguette was voted #1 this year and therefore is the official baguette supplier for the President and the Palais de l'Elysee), our neighborhood is full of great restaurants and bars (Etoile du Montmartre, La Cave Nansouty, Trattoria Pulcinella to name a few), and everywhere I look there's not only beauty but history. It seeps through the cobblestones and slanted walls. I'm reading a book at the moment called "Sixty Million Frenchmen Can't Be Wrong" and the authors Jean-Benoit Nadeau and Julie Barlow make the argument that it is impossible to disassociate the past from the present in France. Everything is intertwined. There is no escaping the labyrinth that is the Marais or the grand cobblestones of Place de la Concorde. 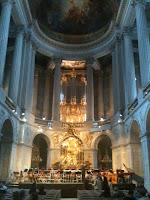 Obviously many European cities are steeped in history, but there's something about Paris that's different. It feels more lived in. I was with a fellow American this week who described Paris as an amusement park for adults. Every street holds something new, a different chapter in the city's history. Yet these beautiful buildings now house an Apple Store or an H&M. The present doesn't stop, but the past still keeps holding on. 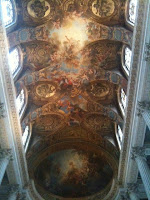 Last week I had the chance to experience 17th Century France. We had the fortune to attend not just one, but two spectacles at the Chateau du Versailles. The first, which happened to fall on my birthday, was an intimate performance of Handel's Israel in Egypt inside the Chapelle Royale which is normally closed off to tourists. There couldn't have been more than 200 people watching the full orchestra and choir perform in the glorious setting. It was easy sitting there to image how Louis XIV must have felt watching a similar performance in his private chapel. It was so grand, almost gaudy in it's grandeur, with the bright golden organ, cherub statues and elaborately painted ceilings.

We enjoyed a glass of champagne during the interval and walked through the marbled hallways leading from the Chapelle to the Opera House. Everything was extravagant. The King certainly was, as self-proclaimed, the State. You could understand why the peasants revolted!

Three nights later we again had the chance to visit Versailles, this time for the royal fireworks show (feux d'artifice royaux). Coming from the US I like to think I know good fireworks. I've been spoilt by 4th of July celebrations, every year out doing the last, but what we witnessed Thursday night was something entirely different. The grounds of the chateau are alone impression with acres and acres of beautifully manicured lawns, gardens and canals. The setting couldn't be more grand, so I was anxious to see how the evening would live up to its surrounding. 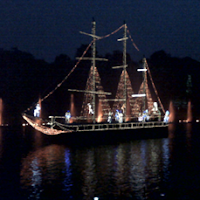 The royal fireworks took place in front of the Grand Canal, a good half hour walk from the chateau's main entrance. There were stands set up facing the water with a row of trees acting almost as a screen. We found our seats, waited for the sun to go down, and then the show began. The fountains exploded into life, shooting up in different heights and colors. The display was accompanied by the music of Handel and an incredible laser show which illuminated the trees in front. The fountains alone put the Bellagio in Vegas to shame. If that wasn't enough the fireworks began. And to top it all off there appeared almost out of nowhere an enormous pirate boat lit up with colored lights and actors in 17th century dress, also completely illuminated. As the boat traversed the Grand Canal, the actors glided around in their luminous costumes while lasers decorated the facing trees with images of London (Handel apparently lived in London). All the while the fireworks continued to blare and the fountains continued to dance. It was sensory overload!

And then the cannons fired! We immediately turned to our left to see the chateau lit up in orange light with an artillery of cannons going off. Running down the hill from the chateau toward the Grand Canal were three rows of at least fifteen cannons firing in time with the music. It was ridiculous!

The grand finale came after close to an hour of non-stop entertainment. The entire surrounding erupted as Handel's Messiah rang out "Hallelujah". Fireworks, cannons, lasers, the pirate boat. It was mind blowing. Although the technology during Louis XIV's time was obviously different, I couldn't help but think that he would have orchestrated something just as elaborate. Leaving the grounds, my ears ringing from the explosions, I couldn't help the smile on my face. It's good to be king.

Starting over in a new city 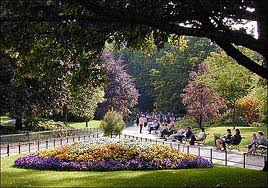 It's not like this is new. I've started over in big cities before. When I was 22 I moved to New York. At 25 I crossed the pond to give London a shot, and now at 31 I'm in Paris. Not too bad, hey? But it's not as glamorous as it seems. Starting a fresh in a capital city is daunting. I was hit last week with a familiar feeling, I felt lost. Not just literally lost (which is often the case), but figuratively lost. Here am I in this big, pulsing city that I now call home, and nothing is familiar. In Paris, more than in New York or London, I'm a foreigner. I don't yet have a grasp of this city, not to mention its language. And I get lost walking home.

But like I said, it's not the first time. And now I have Thierry so we can share the adjustment period. True he's lived in Paris before, but it's the first time for us as a couple and we're making an effort to speak French together which is a whole different challenge.

The best advise I can give to anyone who has just moved to new city is to take control of the city. Find your favorite cafe, frequent your local pub, continue with the activities that you enjoy. For me, hitting the streets with my running shoes was the ideal way. Not only was I releasing some stress, but I was able to explore my new neighborhood. I loved my runs around Brooklyn, crossing the Brooklyn Bridge or enjoying the promenade, and I was spoiled in London with Victoria Park just minutes away. And now, in Paris, I've found my new favorite route. Unfortunately Paris lacks the big parks of New York and London, but its charming streets and smells of freshly baked bread make it equally enjoyable.

The route I've found is mostly pedestrian/cycle friendly and it includes the lovely Parc Monceau which teems with families and fellow runners. It's now my route. I've taken some control of this city of love. Day by day I'm becoming less of a foreigner and calling Paris 'home' sounds a little less strange.

There is SO much choice when it come to dried meat, cheese and yogurt: 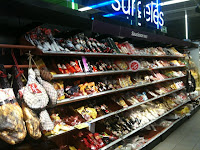 Employees go around on rollerblades. Not only is it more efficient but it looks cool. C'est bon! 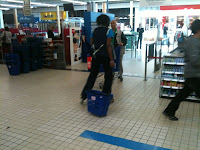 Next week I'm starting an intensive French course for 4 weeks, 20 hours per week, at L'Atelier 9 in Paris. This will be the same time that Thierry and I move into his parent's flat in the 18th. I've created this blog to document our move to Paris, my attempt to grasp the French language, and to see whether or not I can become Parisian. Stay tuned!